Posted by Flashkirby on November 03, 2012
I feel obliged to write about this due to the sheer poor quality of comments left on some sites (if you want an example, look at any video on youtube). There are several types of comments made for various media, but they all boil down to either praise or hate. Say someone drew a picture:

Now there often comments that express how much a person likes it:

this is amazeing thing i have ever seen good job

Or comments about how people would like it to burn off the face of the earth:


wat is this @$%& do u think ur some kindof pro?u fail at drawing forvver

Whilst both of these, in sufficient quantities, give the artist a general idea about how popular his/her work may be, it does not actually mean much at above that.


Say the artist then goes on to draw another picture of questionable quality:

He/She may receive a few more comments reflecting love or hate for it, but above that, nothing changes. The above two example are what I feel are unbalanced comments.

If someone wishes to actually leave a useful comment, they will often appear to be very critical, even if the information itself is useful, and can harm the motivation of some:

It's really ugly and doesn't convey anything. All of the proportions are out of sync. 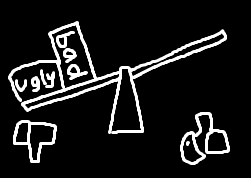 Now both sentences in this comment carry negative connotations, and are usually left by those who believe they are more skilled than others, be it actually true or an inflated ego. These people may be trying to help, or just trying to insult the artist, but either way it doesn't seem very pleasant as with most criticism - this is due to the choice of words effectively making the comment sound like an insult when all the writer may be trying to do is point out perceived problems in the work. If you look at the comment again, you can see that as the entire comment is criticism, it is entirely negative in appearance and thus is still unbalanced, even if was written in good faith.

On the flip-side you can get comments that only highlight good points:


This has got to be one of the most influential pieces of work I have ever seen. I particularly like the freehanded way you've drawn the stick man, as well as how you've managed to so recognisably create the basketball hoop with so few lines. 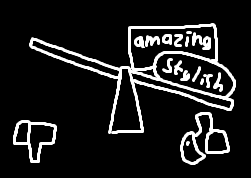 The problem here is that these comments may make the artist believe that the work they are doing is good enough, or better than anything else anyone has done, with a consequence being that the artist may never feel the need to develop their work, or may feel worse upon receiving criticism for it. Like all the previous examples, it also misses out on a crucial part of a useful and productive comment - advice on how to improve, or help on developing ideas.

Say this example artist wants to draw better things than stick men, and all he receives are these comments in the droves. How will this help the artist at all?

Leaving a useful comment is akin to writing a review, though usually much more compact. These comments need to be balanced, highlighting possible faults whilst praising outstanding areas. Say this artist, unable to think of anything to improve upon other than it's apparently ugly and believing that his stick man style is successful, draws another picture which takes these two comments to an almost natural conclusion.
Obviously, not much has changed, and all the artist has actually done is make a few rather crude changes and recycled the same idea. Now if we wanted to provide a comment which helps the artist to improve, simply putting the positive and negative comments together doesn't really aid in helping the artist much (unless they can work it out themselves - but this may lead to disastrous consequences on its own). Just like a meeting or a forum, a useful comment does not just demonstrate the faults and fineries, but most importantly, the fixes.

[Posititive Point] I think that your drawings have potential to be quite entertaining and are done in a pleasantly cartoonish tone, but [Negative Point] as it stands now they appear to be quite poorly proportioned (although this might be part of your style).[Possible Solution] One possible way to improve on it is to flesh out on the details of the objects such as making the stand for the hoop thicker with a thinner brush for the net, and double-check your scale as the legs of the shooter are extremely short in comparison to the rest of the body. Likewise, adding appropriate lines to the basket ball will really help people identify it easily. [Always end positively] All in all, with slight changes this is really promising stuff! 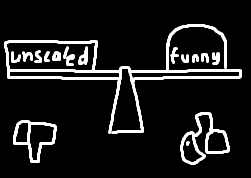 This is the kind of comment that most people will likely appreciate the most. Obviously stating improvements should not be written in a way that will offend the artist or their choice of style/content, such as saying you could "improve it by having less basket ball because it's the worst sport ever". These comments should be helping an artist to refine their ideas, introduce new ones, or guide the artist to a suitable outcome.
Rant Over.
Rants Stuff I made
Flashkirby
Amateur programmer, questionable artist, dubious musician. Up to 1200 characters? Is that a challenge? Anyway, I'm just a person who lives on the internet, doing what I can to try and help others stay positive and find joy, despite it all.