In the meanwhile as I think of something interesting to talk about for tomorrow, have a mysterious drawing of a mysterious man of whom does not match any of my previous art styles, which you can find on my PHOOTOOBOOCKOOT which is somewhere on the site if you can actually be bothered... CHAAAAAANGE. 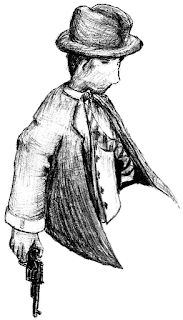 He has a gun too which is cool and all. NOIRE!

I had a flu jab today, 'caus winter and all that. Seems a bit silly to me, I haven't caught anything recently except a cold, and if we're indoors most of winter, surely there'd be less chance for an influenza, as well as the fact that if a family catches one, not much happens to the rest of the world since people are bunged up in their own houses/mansions/boxes/bungalows etc.

Well anyway, I'm unusually tired, probably due to the vaccination, so yeah, not much else happened that I can talk about. Except some annoying kid in the lower years reported me to a dinner lady for purposely hitting him when I was swinging my lunch box - its a habit of mine when I'm bored. The fact he was provoking everyone like hell probably had little to do with it. Anyway, the dinner lady comes over to tell me off with the kid 'in tears (not really, its that kind of trouble maker)', except I promptly apologise for any trouble caused, and offer to shake his hand as well as explaining the situation that he was annoying everybody and was causing trouble in general (insults, shouting etc.) to surrounding doods who were being generally out of the way. This leads to, coupled with my good associations with the dinner staff (such as being helpful and polite - it is good to be respectful), the dinner lady turning on the kid, whom now looks incredibly suspicious and still pretending like he's been hit by a monster truck - also he refused my friendly handshake (what rude attitude). Anyway, had he hmm, not been leaning next to me shouting 'YOU MISSED' every time I was swinging the thing, no wonder he eventually got knocked. The dinner lady gives him a warning and sends him off and says to talk to her if he comes back to cause trouble. That's my problem, being an older student you think I'd have at least some respect from the younger students (even if its very slight), but everyone is so snobbish and/or self-important nowadays, especially from the younger generations like myself (hey at least I admit it, and I try to look out for others). Oh well, lesson learned - gotta be more careful (to both of us, or at least him...)

Well that was a long rant. But that's what diaries/blogs are for. And you reading my life must mean you're some deranged stalker or just bored out of your mind and somehow got here. Weirdos.

(A good reason to) Rant Over (stuff like links).

Arrrt Stuff I made
Flashkirby
Amateur programmer, questionable artist, dubious musician. Up to 1200 characters? Is that a challenge? Anyway, I'm just a person who lives on the internet, doing what I can to try and help others stay positive and find joy, despite it all.