Posted by Flashkirby on May 12, 2008
Continuing on Erthilo's review on TF2, VALVe has also released trailers on Team Fortress 2's 9 characters. So far, not all off the classes have been released, but around half have been completed, which are the SNIPER, ENGINEER, SCOUT, SOLDIER, DEMOMAN and HEAVY. 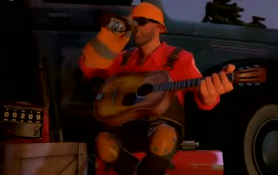 The trailers include the characters indroducing themselves about what they do best, with humor and great animation inbetween. For example, the Engineer is found sitting in front of a blue truck on a his tool box playing his guitar. These short videos will keep you entertained and contains perhaps important info on the characters.
Flashkirby
Amateur programmer, questionable artist, dubious musician. Up to 1200 characters? Is that a challenge? Anyway, I'm just a person who lives on the internet, doing what I can to try and help others stay positive and find joy, despite it all.