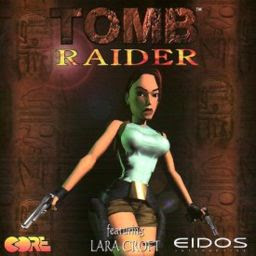 In Tomb Raider, the player controls the female heroin Lara Croft, in search for the three mysterious Scion artifacts across the world. The game is presented in third person perspective. Lara is always visible and the camera follows the action from behind or over her shoulder. The world she inhabits is fully drawn in three dimensions and characterized by its cubic nature. Ledges, walls and ceilings sit at 90 degrees to each other, although the game designers sometimes obscure this to make it less obvious.

The object of Tomb Raider is to guide Lara through a series of tombs and other locations in search of treasures and artifacts. On the way, she must kill dangerous animals and other creatures, while collecting objects and solving puzzles to gain access to an ultimate prize, usually a powerful artifact. Gunplay is restricted to the killing of various animals that appear throughout each stage, although occasionally Lara may be faced with a human opponent. Instead the emphasis lies on solving puzzles and performing trick jumps to complete each level. As such, Tomb Raider in essence harkens back to the classical form of platform style gameplay.

Movement in the game is varied and allows for complex interactions with the environment. Besides walking, running, and jumping, Lara can perform side-steps, hang on ledges, roll over, dive, and swim through water. In a free environment, Lara has two basic stances: one with weapons drawn and one with her hands free. By default she carries two pistols with infinite ammo. Additional weapons include the shotgun, dual magnums and dual Uzis. At a certain point in the story, Lara will be stripped of all her weapons, leaving the player defenceless and forced to recover her pistols.

Numerous enemies as well as a variety of lethal traps can bring about Lara's death in Tomb Raider, the most important threat of which is falling to death. As the game adopts a platform style approach of progress, well timed jumps must often bring Lara safely to the other side of a ledge or she will plummet to the ground below. Other means by which the game will prematurely end include death by burning, drowning, electrocution, becoming impaled on spikes, being shot, being crushed, or lethal damage from animals, human enemies or creatures.

Key items found throughout the game.A general action button is used to perform a wide range of movements in Tomb Raider, such as picking up items, pulling switches, firing guns, pushing or pulling blocks, and grabbing onto ledges. Regular items to pick up include ammo, and small and large medipacks. Game-specific items are keys and artifacts required to complete a stage. Any item that is collected is held onto in Lara's inventory until it is used.

The puzzles that the player encounters across each level vary: pulling specific combinations of levers, a course of timed jumps, avoiding a certain trap or collecting several keystones.

Throughout each stage, one or more secrets may be located. Discovering these secrets is optional, and when the player has found one a tune plays. The locations of these secrets vary in difficulty to reach. Some are hidden along the roadside in bushes, others require the completion of a hidden course or optional puzzle to be found. The player is usually rewarded with extra items.

In the PlayStation version of Tomb Raider, saving the game is restricted to fixed save points within each level, marked by a floating blue crystal. When Lara touches one of these the option to save is made available. The scarcity of these points, however, means that if the Lara dies, large portions of each level must be replayed, much to the people's frustration.

A stage is finished when a certain doorway is reached, an artifact is recovered, or a boss is destroyed.

All in all, great fun to be had by all!
PSX